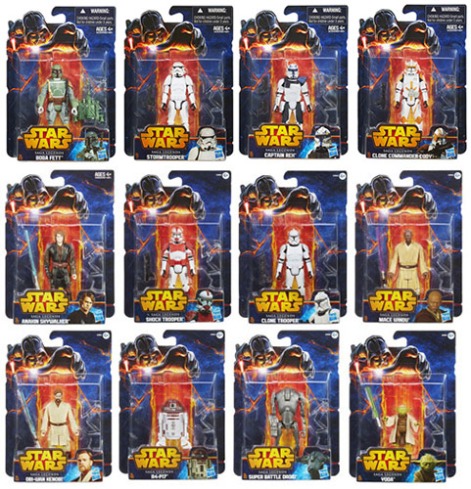 I’ve been a collector of many things over the years. I have bags and boxes full of things ranging from PEZ dispensers to comics to action figures and toys from various films, cartoons, books, etc. What I tend to do is find one or two items that pique my interest and then buy nothing but that particular item for weeks or months at a time.

Two things that I consistently collect are Star Wars action figures and KISS related items. I still have most of my Star Wars toys from when I was a kid (at least the action figures) and I have a multitude of KISS items in my home ranging from KISSmas ornaments to t-shirts and boardgames.

I’ve amassed a very decent collection of recent Star Wars figures thanks in part to following Facebook pages like Yakface and The Jedi Temple Archive. Both of these pages and a few others have turned me on to figures that I might not have otherwise known about.

Hasbro is the primary source for action figures in the Star Wars universe, and last year they did something that has many critics and collectors cringing in horror. They decided to take their fairly successful (but overly prequel bloated) Saga Legends line and reduce the articulation in the figures to five points (head, shoulders, and hips). They also released a line of figures known as the Black Series that features 6″ and standard 3.75″ figures that feature multiple points of articulation and greater attention to detail…..or so we were lead to believe.

In all honesty, the Black Series has been something of a disappointment in my opinion. The packaging has literally been falling apart on store pegs (although this has improved somewhat with the newer waves), and many of the figures, particularly the Biker Scout, are wretched looking for what retailers are asking collectors to pay for them. The paint jobs vary from figure to figure, with Biggs Darklighter being one of the best sculpted and painted figures and the aformentioned Biker Scout being one of the worst. To top things off, retailers seem to be ordering smaller supplies of the figures which means fewer of the really good figures are on shelves, and that leads to jerks who care nothing about the actual figures to scoop them up and sell them for two, three, and even four times what the retail price is going for.

The Black Series figures clock in at roughly ten bucks for the 3.75″ and twenty bucks for the 6″ figures. At Christmas time, many stores and Amazon were having excellent sales on these figures, and I purchased many for less than two bucks. With Christmas way back in the rearview mirror, though, the Black Series price has gone right back to its ten dollar comfort zone.

The Saga Legends line, on the other hand, is pretty good in my opinion. Sure, the 5 POA is a let down for many collectors, but for those of us who grew up with the Original Trilogy and those wonderful 5 POA Kenner figures, a little bit of nostalgia kicks in. Hasbro claims they reduced the articulation because children don’t care about POA and the price could be cut back to half of the Black Series price. Also, Hasbro has packaged Mission Series dual packs featuring the 5 POA figures and they’ve actually got some decent sets out there. The first wave of Saga Legends figures included a nicely sculpted Obi-Wan Kenobi and Yoda figure and the Mission Series had a rather nice looking Jango Fett figure and some decent Clone figures as well.

Of course, many collectors screamed in horror at the reduction of articulation and also at the paint jobs (justifiably so) on many of the Saga Legends and Mission Series figures. I’ve found, however, that going to a brick-and-mortar store to purchase figures in the SL and MS lines is advantageous, because you can pick and choose which figures you want. I did this because I noticed that many of the SL and MS figures had terrible paint jobs, but they varied from figure to figure. I found a number of excellent figures, but I have yet to find a decently painted Mace Windu.

So, the real question is should I continue to collect the Saga Legends and Mission Series figures or attempt to find the rare decent Black Series figures? My son loves the Saga Legends line and, quite frankly, I like it as well. Do any of you out there collect any of these particular figures? If so, I’d love to hear what you think about them in the comments below.

Also, I’ve recently noticed that the new waves of SL and MS figures are finally showing up in my local stores. I’ve already grabbed the SL Stormtrooper, Captain Rex, and Commander Cody, as well as the MS Han Solo/Chewbacca and R2-D2/C-3PO pack.

The photo above taken from Brian’s Toyz of most of the SL figures: