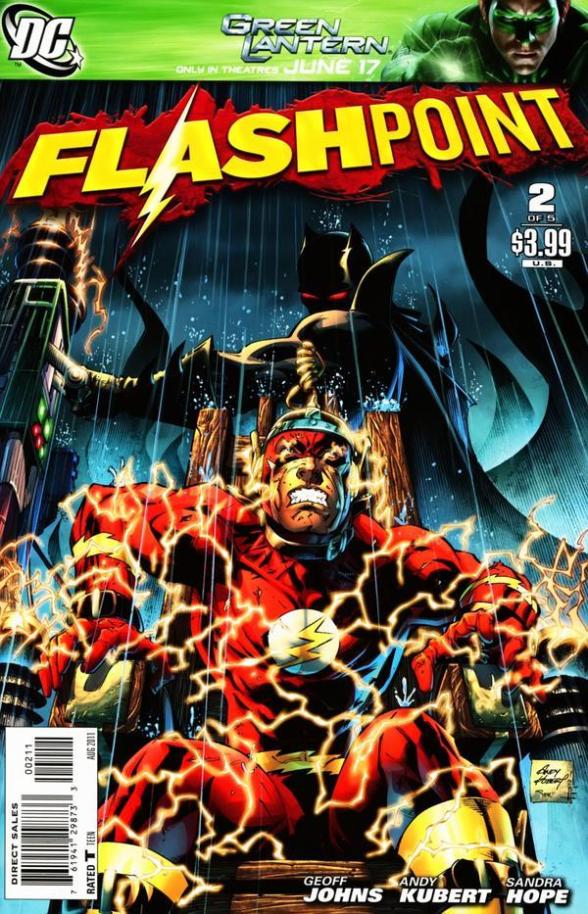 I recently started buying comics regularly again.  The Dark Horse Darth Maul:  Son of Dathomir series caught my attention and I gobbled up each issue.  While the ending was a bit of a cop out (I’ll eventually review the series), the whole run was good enough to spark my interests in comics again.

I ventured over to my local comics shop, Paper Heroes, and started perusing the graphic novels and comic compilations in the hopes to find a book on Batman or one of any of a multitude of Marvel heroes that I’ve enjoyed over the years.  To my surprise, I found myself going to the DC shelves over and over.  I couldn’t make up my mind, but nothing on the Marvel shelf really spoke to me.  However, the DC shelf intrigued me with titles like Flashpoint, Blackest Night, and Infinite Crisis.

I settled on Flashpoint, and was very pleased after reading the book.  While the story is obviously centered on the Flash, it was the peripheral characters that really grabbed at me in this tale.  The most interesting of all was Thomas Wayne as the Batman in the altered timeline in which this story takes place.

Thomas Wayne is a brutal version of his son’s Dark Knight.   Instead of catching villains and bringing them back to Arkham Asylum or GCPD headquarters, Thomas Wayne doesn’t think twice about killing his enemies.  Much like Bruce Wayne’s Batman, he has become a legend, an impossible creature that scares villains, but he’s much, much deadlier.  I love this character and want to read more about him!!!!

Other characters that get a brilliant spin on their stories in this timeline include Superman, who is SOOOOOO much more interesting here than he is elsewhere, Aquaman, Wonder Woman, and Cyborg.  It’s my understanding that these characters are expanded upon in other volumes in the Flashpoint story and I plan to read as many of them as I can (starting with Superman and Batman).

I don’t want to reveal too much more, but know that an event in the Flash’s past sets off the events in this story, and it’s up to him to make things as right as possible.  This is a brilliant story.

Now, having been hooked on graphic novels and comics once again, I started looking for Marvel graphic novels that might offer up similar brilliance to Flashpoint.  On a whim I found Captain America:  The Winter Soldier and a Guardians of the Galaxy graphic novels for the wonderful price of five bucks each at a Walmart while I was working out of town.  They were obviously meant to be cash ins for the recently released films of the same name (there was were Spider-Man and The Avengers graphic novels for five bucks, but I passed on them) and were also previously released novels in a new edition.  I’ve only read Cap’s novel so far, and while it is definitely a good read, it doesn’t quite meet up to the standard set by Flashpoint.

In The Winter Soldier, Red Skull is mysteriously murdered and the Captain, along with Agent 13, has to find his enemy’s murderer and also thwart the plans of a once thought defunct terrorist organization.  I do not yet know if I’ll pick up the second volume in this story, as I’m much more interested in the Flashpoint books now.  If they hold up, I’ll probably scoop up Blackest Night next.

I’ve always considered myself a Marvel guy.  In my early years I loved the colorful characters of Batman, Flash, Green Lantern, etc. but as I grew older, the grittier characters of the Marvel universe grabbed my attention.  Now I’m swaying in a sea of doubt.  Could it be that DC is winning me over yet again??????  Will Marvel win me back with a brilliant X-men story?????  Who knows???  Maybe a “dark horse” like, um, Dark Horse, will steal my soul?

Stay tuned, true believers and, as always, thanks for reading!

There has been a ton of hype about the recently released (and very successful) Guardians of the Galaxy film. Needless to say, the film did manage to live up to the hype and showed that Marvel could take characters that are fairly unknown out of comic reading circles and make an excellent film with them. I saw it and I loved it, but the real shining star in Marvel’s cinematic releases this year has got to be Captain America: The Winter Soldier.

Cap’s first film was very good, but I felt as if it (as well as the first Thor film) was rushed along and used more to lead up to the heavily anticipated The Avengers instead of giving us a decent story about the hero. In The Avengers, Cap took a backseat to the other players, with most of the action going to heavies like Thor, Hulk, and Iron Man. This time around, Cap leads the story and never lets go of that lead.

The Winter Soldier is not heavily laden in CGI or even close to as humorous as GOTG is, but it is an excellent espionage thriller with a major whodunit plot that perfectly addresses similar actions happening in our world now, a brilliant cast, and excellent direction.

The film takes a look at Cap’s world post-New York incident (The Avengers). S.H.I.E.L.D. is taking measures to not only protect the United States, but the world. When Cap finds out what S.H.I.E.L.D. is up to, he instantly questions the reasoning behind it. Soon enough, Captain Steve Rogers finds himself on the run with few clues, fewer friends, and a very nasty group of villains hot on his heels. I honestly cannot say too much more than this since revealing the enemy in this film would ruin it overall. Just know that if you haven’t seen the film in theaters (I did, but am just now getting around to my review after buying the Blu-ray), you’re in for a surprise.

Oh, and that whole Winter Soldier bit? It’s pretty important as well, as the Winter Soldier is a key member of the enemy’s arsenal, and he more than holds his own against Captain America, Black Widow, Falcon, and even old Nick Fury.

Watching this film reminded me of the spy flicks and political thrillers that came out during the 70’s and 80’s. It’s fast-paced, there’s a constant threat, and the resolution leaves you with more questions (that I’m sure will be resolved throughout the other Marvel films) than answers.

The cast is solid. Chris Evans nails his role as the Captain once again, and I still can’t get over how brilliant he is in the role. There is no other Steve Rogers as far as I’m concerned. Evans is it! Scarlett Johansson does a fine job once again as Black Widow. We get to see a little bit more about her character (especially in the deleted scenes), and she brings a bit of humor to the film much like she did in “The Avengers.” Anthony Mackie introduces us to Falcon, a soldier who counsels fellow soldiers that are trying to adapt back into their former civilian lives. Falcon gets back into uniform to help the Captain when friends are far and few between. Samuel L. Jackson reprises his role as Nick Fury, and even though he’s put this character on multiple times, he gives us an even deeper look at Fury in brief sequences with Rogers and other characters in the film.

Sebastian Stan portrays the Winter Soldier. Fans of the comics know this character’s real identity, but for those of you unaware, I won’t reveal who he really is. Just know that his battle with Captain America becomes very personal and is intense both physically and emotionally for both of them. I hope to see more of the Winter Soldier in later films. Another brilliant castmember is the legendary Robert Redford as Alexander Pierce, head of S.H.I.E.L.D. Sadly, that’s all I can really say about him without giving away too much.

There are a lot of supporting actors and actresses that did brilliant jobs as well. Most notably, Frank Grillo, Cobie Smulders, Hayley Atwell, Emily VanCamp, and Toby Jones. There are others, but the list is much too long.

Simply put, this film is brilliant. The direction was great. The production layed off of the CGI as much as possible and used real props for most of the scenes (even many parts of the bigger action scenes). The story took the front seat while the gee-whiz factor took a step back. It’s literally a superhero film with a very real and grounded superhero.

I haven’t posted anything on my weight loss struggles and victories recently, so here’s a brief update.  As of today, I’m actually gaining weight.  It’s not all muscle, either.  Ever since I returned home from Missouri back in July, I’ve been having this on again/off again relationship with my eating habits, exercise routing, and willpower.  At first I thought it was just me becoming bored with Insanity because I’ve done so many rounds, so I grabbed T25 in the hopes that a new routine would kick me back into overdrive.

Well……it hasn’t.  In fact, I’m less enthusiastic about T25 and have been debating on whether or not to start up the old Insanity routine again.  I’ve tried to integrate jogging into the picture, but haven’t been very successful due to the fact that the roads by my house are rather traffic-heavy and I don’t have time in the evening to drive down to a park.

My appetite has gone bonkers over the last couple of weeks as well.  I’m eating a lot more, working out a lot less, and have lost pretty much all desire to lose more weight despite seeing the scale creep back up on me.

So, with all of this said, I come to you, beloved reader, and ask you what do you think I should do?  Also, words of encouragement are also welcome.  I’d rather not use supplements (although I have been known to use raspberry ketones and pre-workout powder recently), but if any of you know of a decent one, I’ll give it a shot.

Thanks ahead of time for any and all comments.

My friends over at Southern Geek, a Facebook Group based primarily out of Mississippi, have started naming a Geek of the Week recently.  I’ve been a part of this group ever since I first ran into two of its founders, Rafe and Shannon White, a couple of years ago at Wizard World’s New Orleans Comic Con event.  We’ve been friends ever since and while we don’t get to physically see each other in person very often, we do get to hang out on Facebook quite a lot.

I was dubbed Geek of the Week for the week of September 1.  I’m very proud of this fact, because it not only confirms my nerdiness in the Southern Geek community, it also lets anyone who happens upon the group’s page know that all of us, whether it’s myself or any other GotW or any other member of the group, are not ashamed to admit our varying levels of geekdom, nerdiness, or the degree to which we love different television programs, comic books, films, musicians, etc.

Check the group out at https://www.facebook.com/groups/southerngeek/ and be sure to tell them that Kendall and/or DDK sent them your way.  Who knows, if you join up with us you might just become the next Geek of the Week!!

Thanks for reading this brief post folks.  I hope to have something a bit more longwinded soon.  I have a couple of topics that I’ve been throwing around lately and I’m feeling the need to write about them.  Stay tuned!