The Happiest Place On Earth!

(Note:  As a rule, I never publish photos of my children in this blog.  That’s why everything you see features me and no one else)

For most folks in southern Louisiana, Mardi Gras is a magical time of year that starts with Twelfth Night and finishes with Ash Wednesday.  While Ash Wednesday is primarily a Roman Catholic holiday, The weeks that build up to it and Mardi Gras have been embraced by people of all sorts of religious (and non-religious) backgrounds and is basically a huge world holiday.

Well, being from Louisiana and having lived all of my life here, Mardi Gras is fun, but it never hurts to miss it every now and then.  For starters, there’s a large influx of tourists in the larger cities like New Orleans, Lake Charles, and Lafayette, that are only familiar with the glitzy and heavily commercialized version of Mardi Gras that most people know and love.  In rural Louisiana, it’s an entirely different story, but I’ll save that for another post.

With the large amounts of visitors comes large amounts of traffic, inebriated drivers, and a few bad guys as well.  This year, my family decided to skip Mardi Gras and head for sunny central Florida to visit Disney World.  It was one of the best ideas we’ve had as a family in a long time.

Our adventure started with our arrival at the Port Orleans French Quarter Resort.  The resort was extremely nice, and as always, Disney went to great lengths to recreate that old New Orleans/Mardi Gras feeling that we all know and love.  We were offered Mardi Gras beads upon entry to the main building, given a quick rundown of what our plan included, and shown where our room would be.

Our room was located in Building 7, right near the water.  It was a lovely place to be both day and night.  The courtyard was reminiscent of many New Orleans homes in the Garden District, and the early morning fog only added to the atmosphere.

We went to Disney’s Hollywood Studios first.  There, we rode the Great American Movie Ride, took in the Indiana Jones stunt show, and survived the Hollywood Tower of Terror.  We had an excellent meal plan and took in some great food with it.

We did a ton of walking and visited a few shops as well.  Hollywood Studios is, at least to me, the smallest park in the bunch, and it was a nice way to spend our first (and shortest) day at the park.

Day Two found us at Disney’s Animal Kingdom.  This is, was, and always will be my favorite park.  From the wonderful Festival of the Lion King show to the hilarious It’s Tough To Be A Bug production to the excellent Expedition Everest, I love everything that this park has to offer.

My daughter and I were handpicked by an African band in the park to help them out with some traditional African dancing.  We, along with a few other volunteers, did our best to do justice to Africa’s wonderful traditions. 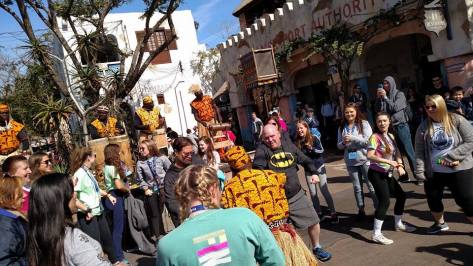 Yeah, that’s me in the Batman hoodie trying to get my groove on!

Our next day was spent at the Magic Kingdom.  It’s a close second as far as favorite parks go, primarily because it has some of the best rides and activities.  We took the Jungle Cruise, rode Splash Mountain, Space Mountain, Seven Dwarves Mine, Big Thunder Mountain Railroad, Pirates of the Caribbean, the Haunted Mansion, and many other rides.  Myself and one of my children took on A Pirate’s Adventure~Treasures of the Seven Seas, a map-based game that sent you on the hunt for pirate treasure in Adventureland.  It featured realistic treasure maps and interactive points of interest.  It’s a whole lot of fun!

Our fourth day at the parks included a visit to Epcot.  We took more photos with characters here than at any other park.  We toured the various countries, rode almost all of the rides, and had a generally great time.  What I love about Epcot is that the emphasis is on educational fun.  Each ride and exhibit we toured featured multiple educational opportunities.  From weather to space to communications and countries, we learned a lot on this visit! 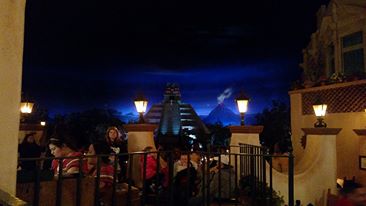 Our final day at Disney World featured a return trip to Disney’s Hollywood Studios.  We rode the Rockin’ Rollercoaster and took an extensive tour of the Star Wars Launch Bay.  It was an excellent journey through the films, characters, and music of Star Wars.  We also got to meet Kylo Ren and a couple of First Order Stormtroopers (and a Jawa)!  One of the kids also visited the Star Wars Droid Factory and built two custom droids!

This was a much needed trip for my family.  It has been a rough few weeks at work for both myself and my wife, and the kids needed a break as well.  We were sad to go home, but know that soon enough we will be returning to Disney World again.

For the record, this was my third time to visit the Mouse That Walt Built, and a first trip for one of our kids.  We had a blast!

As always, thanks for reading, and just so you know, the characters that we took photos with included Goofy, Mickey, Pluto, Chip and Dale, Belle, Kylo Ren, King Louis, Baloo, and Flik!