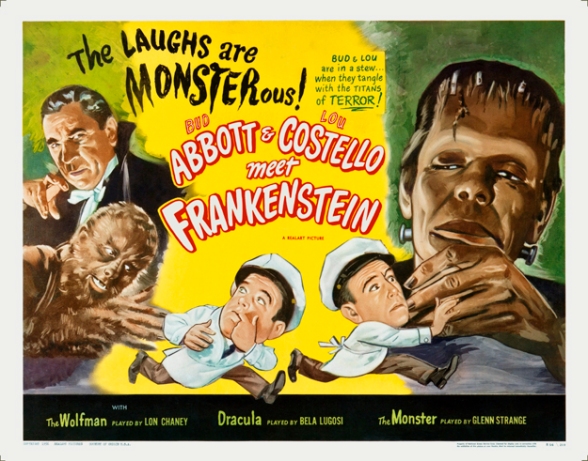 The film’s plot involves Dracula (Bela Lugosi) arriving in Florida to join forces with Dr. Mornay (Lenore Aubert) to replace the brain residing in Frankenstein’s monster (Glenn Strange) in order to make him both stronger and more obedient and thus, a better servant for Dracula. The brain that Mornay has chosen resides in the simple head of Wilbur (Lou Costello), who believes that she is in love with him.

Hoping to intercept both Dracula and the monster, Larry Talbot (Lon Chaney, Jr.) frantically calls the train station where crates that contain Dracula and the monster’s bodies are being shipped. He wants to prevent them from being opened so that Dracula can’t build a bigger, better monster. Before he can reason with Wilbur, though, he transforms into the Wolf Man and Wilbur hangs up. He believes that Talbot has placed his dog on the phone.

Wilbur and his partner, Chick (Bud Abbott), deliver the crates to McDougal’s House of Horrors. While opening the crates, Wilbur witnesses both Dracula and Frankenstein’s monster revive. Chick doesn’t believe him and whenever McDougal (Frank Ferguson) arrives and finds both crates empty, he has Chick and Wilbur arrested for theft.

The duo are later bailed out of jail by a mysterious woman named Joan (Jane Randolph) who claims that she is also in love with Wilbur. Eventually Chick, Wilbur, Joan, and Dr. Mornay attend a masquerade ball where Dracula, the Wolf Man, and Mr. McDougal all show up. A series of chases and confrontations occur and things eventually come to a head at Dr. Mornay’s laboratory.

Wilbur is captured and then is freed by Chick. Dr. Mornay’s clueless but well-meaning assistant, Professor Stevens (Charles Bradstreet), finds out the truth about Mornay and Dracula and helps Chick, Wilbur, and the Wolf Man battle them. Frankenstein’s monster squares off with Chick and Wilbur while the Wolf Man battles Dracula. You’ll have to watch the film to find out what happens next.

The slapstick comedy proved to be extremely popular. It also revived the careers of Abbott and Costello. In the mid 1940’s, everything from family tragedies to illnesses and internal arguments limited the pair’s number of film appearances. It also brought Universal’s most popular monsters back to the screen.

According to the documentary Bud Abbott and Lou Costello Meet the Monsters! (included on the Frankenstein Legacy Collection DVD and Blu-Ray), Abbott and Costello kept the atmosphere light on the set. This was apparently something that they did on all of their movies. Always the professional, Bela Lugosi supposedly got angry with the pair at times and stormed off of the set, but eventually began to enjoy some of the schemes the duo would play. The documentary also mentions how makeup techniques were used that reduced the amount of time that Lugosi, Chaney, and Strange spent in the makeup chair.

The film is a fine entry in the Universal Horror collection. While it isn’t scary, there is one pretty shocking death that occurs late in the film. Otherwise this is a straight comedy that happens to feature some of the most iconic monsters in film history.

Thanks for reading my post. We’re getting closer to Halloween and on that day, I’ll be blogging about my favorite Universal Horror film!

One thought on “Days O’Horror #20: Abbott And Costello Meet Frankenstein (1948)”