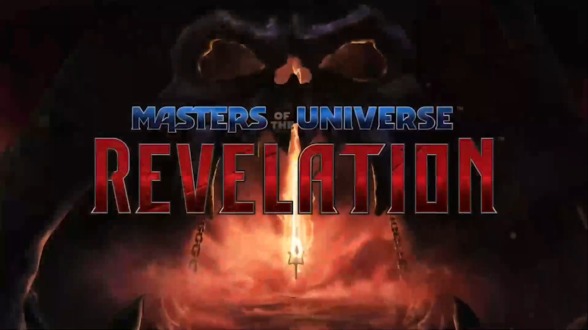 I recently watched and reviewed the new Netflix series Masters of the Universe: Revelation. You can read my thoughts on the series here. I was also fortunate enough to receive a free MOTU:R Masterverse Battle Cat to review as well! This figure is wonderfully massive, has great articulation, and looks awesome standing on my desk. He takes up a lot of real estate, but he’s too beautiful to box up and put away. Read on to get a more detailed review of the figure.

The packaging is beautiful. It features original artwork on the back and one side panel. When you open the top of the box, the words By The Power Of Grayskull are revealed. Getting Battle Cat out of the box was simple enough. I simply opened the top of the box after slicing one small adhesive closure and BC slid right out with ease. Getting him out of his security bands and the plastic casing was a different story.

The first thing that I noticed about this green kitty was that Mattel definitely wanted him to stay put! There’s a clear plastic band across his waist, tail, and all four legs. There’s also two bands holding his head and helmet in place. The right side paws of Battle Cat were rather tough to get to with a knife, but I managed to cut them without damaging the figure. The plastic case also holds BC in place securely, so be ready for a little bit of a fight to get him out of the plastic.

Once out of the box, I took a look at the figure with his full armor in place. The helmet stays put by snugly locking into place behind Battle Cat’s ears and jaw. It features painted eyes that look exactly like the ones on Battle Cat in MOTU: R. The saddle is held in place with two belts. One sits at BC’s midriff and the other sits near the rear hindquarters. You can adjust the belt’s fit to your liking. Both the helmet and saddle can be removed to reveal Prince Adam’s best bud, Cringer.

Cringer looks simply wonderful. I’ve read other reviews that state that this is the first time that we get a true Cringer action figure, but as a guy who grew up with the original series and literally saved all of his pennies, nickels, dimes, and quarters to buy the He-Man and Battle Cat combo set, I can say that whenever I removed that old Battle Cat’s armor, he was Cringer in my book. Sure, he had a menacing growl on his face, but he was still Cringer to me.

One thing that I have to mention is that the box claims that there are thirty points of articulation on this figure. By my count, there are only twenty. You could argue that there are twenty-two if you claim the up and down movement of Battle Cat’s two torso POAs is separate from their side-to-side articulation. In any case, I’m missing eight to ten POAs and would love it if someone told me where they might be on this figure. Would that have prevented me from getting this figure? Nope, but I just thought that I’d bring some light to that misinformation on the box.

The articulation on this figure is exceptional. It’s very easy to pose BC and he looks awesome in just about any position that you place him. I’m especially fond of his head and torso articulation which makes him very cat-like. I do wish that the tail had one or two of POAs, but it looks fine as is.

Since I don’t have any of the other figures in this line at the moment, I decided to include a photo of Battle Cat with the only other hero that I believe he would make a good companion with, the Phantom. I think the contrasting of purple and green looks pretty smart. How about you? In all seriousness, I’ve included this photo to give you a size reference.

Thanks for reading my post. I’ll be posting about an upcoming event that I’ll be attending in the near future, so be on the lookout for that post!

3 thoughts on “Masters of the Universe: Revelation Masterverse Battle Cat!”