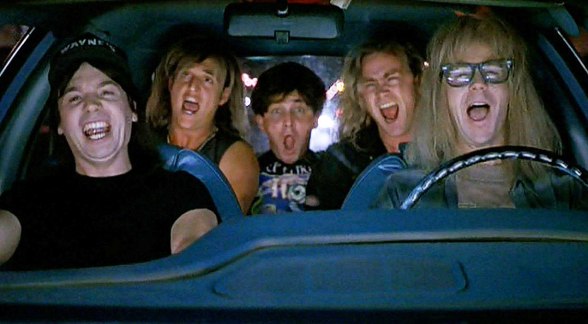 In my teen years, few things made me laugh as hard as watching Mike Myers and Dana Carvey as Wayne Campbell and Garth Algar on their iconic Saturday Night Live sketch, Wayne’s World. The sketch combined two of my favorite things, comedy and metal music. It spawned catch phrases such as “Party on, Wayne! Party on, Garth!” “Schwing!,” and the header for this post about monkeys flying out of butts. The duo were a massive success and it was only a matter of time for SNL to cash in on them on the big screen.

The film version of Wayne’s World was released in 1992. It was the second film to be released based upon an SNL sketch. It became and remains the highest grossing SNL film. It starred Myers and Carvey in their respective roles and added a ton of stellar actors in supporting roles. Rob Lowe co-starred as Benjamin Kane, a crooked TV producer that manipulates and exploits shows similar to Wayne’s public access show in order to make as much money as possible no matter what happens to the actual program. Tia Carrere co-stars as Cassandra Wong, lead vocalist and bass player for Crucial Taunt, and Wayne’s eventual love interest. The rest of the cast includes Brian Doyle-Murray as Noah Vanderhoff, the sponsor of Benjamin’s version of Wayne’s World, Colleen Camp as Vanderhoff’s wife, Lara Flynn Boyle as Stacy, Wayne’s slightly insane ex, and a ton of other actors including Ed O’Neill, Michael DeLuise, Kurt Fuller, Donna Dixon, Dan Bell, and Lee Tergesen. There were also a number of cameos including Chris Farley, Meat Loaf, Ione Skye, and Frank DiLeo. Alice Cooper and his then current band appear in one sequence as well. That sequence spawned the catchphrase, “We’re not worthy!”

In the movie, Wayne and Garth are taken advantage of by Benjamin, who takes full control of their show in order to make money off of it. Benjamin also tries to steal the love of Cassandra by helping her make a music video. He succeeds in breaking up Wayne and Cassandra but Wayne teams up with his friends to win her back by staging a concert for record producer Frankie Sharp and exposing Benjamin for who he really is. All of these events are laced together with hilarious moments throughout the film including the now iconic “Bohemian Rhapsody” ride through Aurora, Illinois, an homage to Lavergne & Shirley, a run-in with the T-1000 (Robert Patrick) from Terminator 2, and the memorable film “endings” sequence that includes a Scooby-Doo ending.

The film was a major hit and so was its soundtrack. The album peaked at number one on the Billboard 200 chart. It featured classic songs such as Bohemian Rhapsody from Queen, Foxy Lady by The Jimi Hendrix Experience, and Dream Weaver (new recording) by Gary Wright. It featured contemporary tracks from bands like BulletBoys, Red Hot Chili Peppers, and Alice Cooper. Tia Carrere is also featured on tracks that she performed in the film. Other artists included Black Sabbath, Soundgarden, Cinderella, and Eric Clapton, among others.

The film, directed by Penelope Spheeris, best known for her trilogy of music films, The Decline of Western Civilazation, catapulted Myers into a successful film career. It pulled Rob Lowe back into the spotlight after having almost killing his career in the late 1980’s with a scandalous sex tape. It also brought significant attention to the careers of Tia Carrere and Dana Carvey as well as re-sparked interest in classic rock bands, most notably Queen.

You can’t deny the many things that Wayne’s World did for its stars, its featured musical artists, and pop culture in general. The film’s influence is still felt to this day. A sequel was released the following year but SNL couldn’t catch lightning in a bottle twice, as that movie proved to be a failure. Thankfully, the original film lives on and can be watched on numerous streaming platforms and good ol’ fashioned VHS, DVD, and Blu-ray.

Thanks for checking out my post. I recently shared this film with my son and he loved it. It’s one of my favorite films of all time and I’d love to know what you think about it in the comments section. See you again, soon!